I love bread. I once bought a bread maker from Canadian Tire and made all sorts of bread; nutty kinds with different grains and dried fruit, then I went through a vegetable phase and made loaves with zucchini and carrots… for like a week and never touched the thing again. There are things that you need to leave up to the professionals, roof repairs, off-shore oil drilling, cellphone unlocking and bread making. I recently hit up this spot in the Mile-end that has been giving the people of Montreal bread boners claiming them to make the “best bread” in the city.

Inside a zeppole at La Cornetteria

March marks the month-long celebration of my birthday bringing together friends and family, heartfelt presents and gift receipts. But more importantly, March is the unofficial-official beginning of Zeppole month. This Italian dessert is usually made once a year to celebrate St. Joseph’s day, but for local bakeries, they take the entire month and the opportunity to produce these light and fluffy doughnut-like treats to satiate cravings that have been building up over the past year.

Prayers are answered, a real trattoria in the west-island – Deli La Trattoria

I once was helping my sister set up a lunch party she was having at her place. There was nothing that would have prepared me for what I was about to witness. As I was bringing in a bowl of salad to the dining room, I stopped frozen in bedazzlement – not in the sense that I was blinged out – but there they were… two huge deli containers piled high with sandwiches and casserole dishes of pasta. I was alone in the room and realized there would be no witnesses, but it was too good to be true. It had to have been a setup, I looked for the cameras thinking leaving me alone in a room with platefuls of deli sandwiches must have been some sort of prank or a social behavior experiment like when they dump a crate load of bananas in a primate cage at the zoo.

I was told about this small Italian deli in an nondescript strip-mall facing the highway hugging the side of a Couche-tard on the outskirts of the suburbs a while ago. The idea of writing about it never crossed my mind, because every time I come here, I suffer from deli-hypnosis; something comes over me and I can only see and think about what’s in front of me. Don’t judge this book by it’s cover. Looks can be deceiving, Deli La Trattoria is like a sugared up three year old after you’ve spun him around 15 times… full of surprises.

Behold. Wipe your slobber whilst admiring these works of beauty in all their glory. With an assortment of sandwiches and wraps, what stands out is their sausage sandwich and their fried chicken sandwich. If you can handle spicy, I recommend the spicy sauce. Also, you can also asked for it pressed.

Along with the freshly made sandwiches, you also have the option of hot meals; pasta and soups that change daily. Get the meatballs when they have it, then grab a baguette and then CALL.ME. 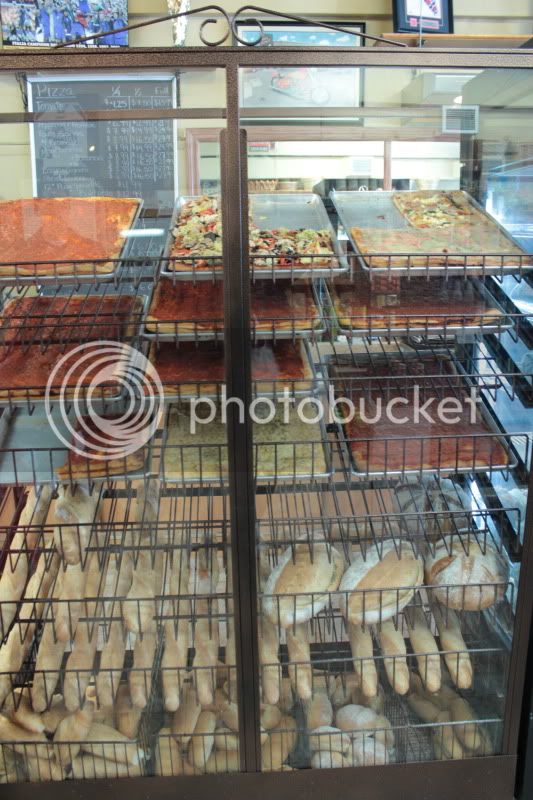 Those beautiful tiled pizza squares was what I was in the hunt for this particular day. Please note the loaves on the lover shelves, they are made fresh in-house daily.

This is a piece of the quarter vegetarian I took home. Topped with grilled peppers, mushrooms, artichoke hearts, olives on top of a homemade focaccia and marinara sauce. The tartness of some of the pickled vegetables cut through the sweetness of the bread and sauce.

Make sure you get an order of these “fries”. Herby and battered potato wedges, it’s never really an option NOT to ask for an order (which comes in both half and full bags). There have been times where I’ve got my sandwiches in hand, a pile of sliced coldcuts and walking past the service line and grabbed a bag… it would feel wrong otherwise… like the old men who wear short running shorts at the gym pulled up to their nipples.

A deli case to rival most deli cases. If any of the prepared sandwiches don’t tickle your fancy (which I don’t see how it wouldn’t unless your fancy is really picky), sandwiches of choice are made to order, so don’t hesitate to ask. 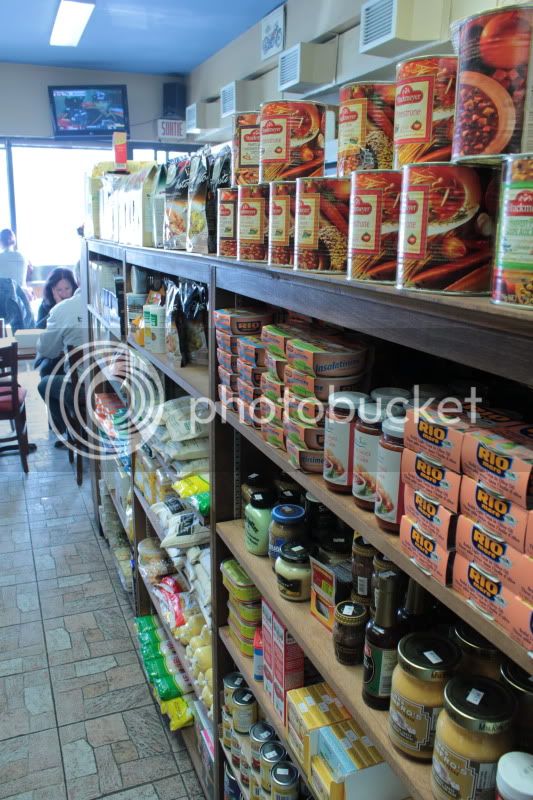 From fine Italian products to freshly-made ready to eat dishes, Deli La Trattoria in Kirkland is a small deli that packs a wallop with everything Italian imaginable – minus an old man out front hosing down the sidewalk.

With a warm and friendly atmosphere, La Trattoria’s ultimate goal is make sure you’re fed and full. Where else can you go pick up a container of home-made red sauce, half a pound and Genoa ham, a sausage sandwich and an espresso to spill all over yourself while driving home? One of the few places around town where when they ask you how you’re doing, you can tell and feel that they actually mean it.