Whether it be during the holidays, or entertaining guests from out of town, if you admit to it or not, we’ve all be guilty of over eating and all the wonderful stuff that comes with it. The post-glutton depression, the various “sweats” brought on by various meats and that sinking feeling at the bottom of your stomach, this my friends is the “event horizon”; the moment when you started to feel full, starts to be eclipsed by the feeling of you hating yourself. All the things that happen when you find yourself heaved over the side of the sofa living an anti-acid TV commercial. That being said, to exercise these caloric daemons and detox my body of impurities, I couldn’t find a better way to cleanse my emotional palate than to break some Indian food against my face.

A few of us went to Punjab Palace in Parc-extension. This spot (originally review here)was a victim to arson two years ago and was subsequently closed for 14 months, I drove by not too long ago and noticed banners across the building announcing that they are now opened again, we decided to check it out.

We started with an order of vegetable samosas served with a sweet and spicy tamarind sauce and chimichurri. Gigantic deep-fried dumplings filled with a more than generous filling of spiced potatoes, lentils and green peas. I’m not going to lie, I can make a meal out of these things, hit me up with three of four of those bad boys and a drank, and I can watch Men’s Olympic water polo and hate myself into tomorrow.

Laced with lots of turmeric, and spices; to the uninitiated, these will probably make you sweat in places you didn’t even know you had glands. Besides the heat from the spices, be mindful of the actual heat from the mouth singeing pillowy guts of the dumplings.

We also split an order of nine vegetable pakoras. These vegetable fitters consisted of cauliflower, broccoli, onions, battered and deep fried and served with the same dipping sauces as the samosas.

Fried in a seasoned slurry, the nuggets of fried vegetable were fragrant when paired with the cilantro sauce. Let’s be honest, my affinity for fried things borders on perverse; you can probably fry up an old cotton ball wrapped up in a shoelace and more chances than none, I’ll still eat it – I wouldn’t be proud of it, but I’ll eat it.

Our first main was the Lamb Pasanda – a lamb curry made with yoghurt, topped with paneer and coriander. The amount of spices used in this curry rendered the flavours extremely profound and rich. The salty hit from the fresh paneer went well and complimented the smokiness of the curry and lightened up each bite. The lamb was nice and remained juicy in its cooking and added to the deepness in the overall flavour of this dish.

Butter chicken. If you can’t tell by the name of the dish, it’s the Indian version of lasagna. No, not really. Chicken that’s been marinated in a fiery chili and yogurt sauce is skewered and cooked in a tandoor oven then finished off in this silky smooth tomato based sauce. The star of this dish is the sauce. If it was socially accepted, next time, I would just ask for a straw and the sauce and none of the pesky chicken of the butter chicken dish to get in the way.

I’ve always regarded this dish as the intro dish to Indian cuisine; the dish that you give to someone who have preconceived notions of Indian food to open their eyes and introduce them to the wonders of Indian food.

We also split the “Grill Tandoori #1” which included chicken tikka and sheekh kabab amongst the four of us. The same chicken found in the butter chicken – pre sauce – was featured in this dish – a mix of both white and dark meat, the chicken’s flavour was as bright as it looked. The kabab was a skewer of ground lamb mixed with an assortment of spices whose aroma nearly permeated the entire dining room. Hints of cumin, coriander and the tickle of cheyenne, the aromatics were so balanced it was practically fruity. 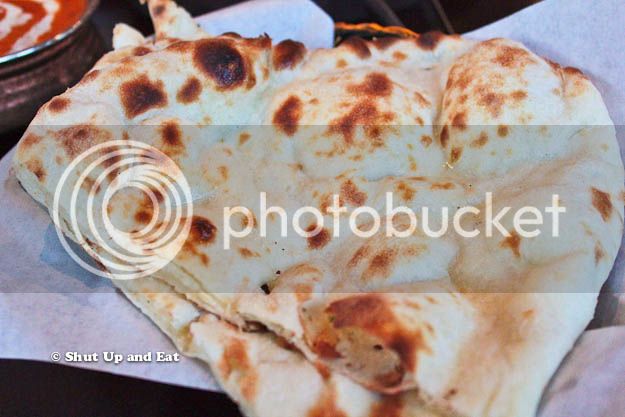 Not to panic, we ordered a multitude of sauce delivering vessels with our meal. These fluffy discs of naan bread facilitated the sauce consumption without looking like five year olds licking the ketchup off the plate after finishing their french fries.

We also had the garlic version of the naan bread.

An order of basmati rice rounded out the back end for Team Sauce Soppers.

Like I mentioned before, this spot was a victim of a senseless crime and the family behind Punjab Palace has made the effort to bring the neighbourhood and former clients tastes and flavours that once were. I’m happy to see that the menu has stayed the same, paralleled by the service and food quality. A new look after the fire, being able to rebuild and show diligence in the face of adversity is a testament to their work ethic and determination to burn your tastebuds off leaving the only smoke in the area the kinda that shoots out of your ears.

Ate here tonight. Had excellent goat curry and my dining companions were equally happy with their dishes. Great value too. Will definitely be back!

one of the best indian ive tried! cheap good service