I’ve said this before and I’ll say it again, the concept of “brunch” is so arbitrary to me, it’s been fetishized, set to a bunch of unspoken culinary meal to time matrix regulations that people dictate their sundays based on when and what they eat – as I so eloquently expressed my view here. I mean, I understand how sometimes cereal is good at any time of day, and how some times people will have “breakfast for dinner”. I actually knew someone who wouldn’t eat pancakes or eggs benedict because those foods are reserved for sundays ONLY – I nearly had an aneurysm when she tried to explain her reasoning to me… Man, I don’t know if people are starting to get more and more annoying, or I’m starting to hate more and more people.

I got word that montreal’s premiere (not to mention) one and only chocolate bar – Cacao 70 – started serving brunch *shiver* and I went to go check it out. If you’ve never been here before, Cacao 70’s menu runs the gamut from sweet or savoury waffles and crepes specializing in the chocolate variety, signature chocolate cakes and other chocolate confectionaries, and they also boast a collection of different kinds of chocolate in varying percentages of purities… so if you’re a chocolate fiend or cocao lover, and if you haven’t already figured by the menu examples or even the name, they serve lasagna.

We looked over the menu and noticed some pretty solid typical breakfast, I mean brunch items, as well as some of Cacao 70’s signature items. 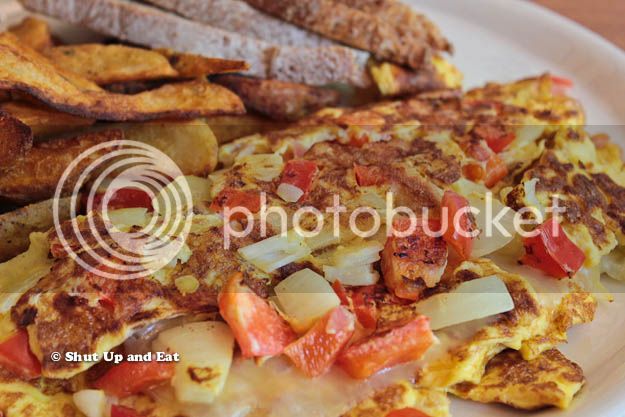 My homie ordered the “hangover omelette” – A huge three egg omelette, with peppers, onions, cheddar cheese and bacon. It came with potato wedges and slices of whole wheat toast. What can I tell you what you don’t already know about eggs? Don’t get me wrong, it was solid. A more than generous serving of eggs with filling coming out the wazoo – that’s if your wazoo is often filled with onions, peppers and bacon. For a hearty appetite, this dish wasn’t finished and was almost doggy bagged home.

The potatoes were a nice touch – pretty much a staple on any brunch menu. Generous and fried, the overall dish lived up to its name as it provided the perfect amount of starch and sponge-like sopping material to soak up the volatile biomass lurking in your stomach as well as help lay the foundation for the day after beer-flu medication you’d be taking. Just remember, a hangover is just God’s way of saying, “You kicked ass last night!”. 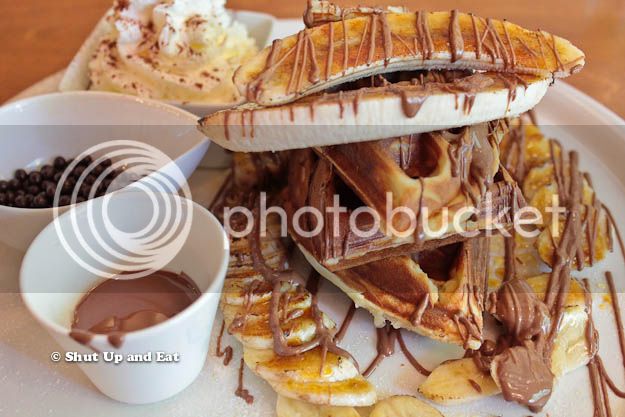 The waffle itself was crunchy on the outside and was more toasted than I’m used to, as I like my waffles like my pancakes, cakey and fluffy.

Yes, I understand that this can be argued as a waffle is a waffle… did it dance around and do some little sexy waffle dance? No, but what made the difference was the details that went into the making of this dish. Caramelized bananas, can you name anywhere else that would take the time to caramelize and candy bananas for a waffle dish? Nope. It isn’t anything super fancy, and it doesn’t have to be; it’s a nice looking and tasty waffle with great accompaniments that’s done right, and there’s nothing wrong with that.

Not to go uncredited, the waffle came with a side of fresh fruit with, you guessed it, chocolate dipping sauce.

What struck me first was the fact that Cacao 70 was serving BRUNCH save days a feel from 10am to 4pm. PREPOSTEROUS! Brunch isn’t ALLOWED to exist outside of the weekend though… Oh you mad? Suck it. The team at Cacao 70 is flipping a big chocolatey finger to brunch purists and is calling on all chocolate lovers out there to some sample the fruits of your holy land. With a team of chocolate lovers who can absolutely answer any and all chocolatey questions you may have, Cacao 70 welcomes you with a complimentary sampling of their hot chocolate beverages as you sit down. If it’s for brunch or dessert or even a late night snack, the menu will please any discerning tastes that will satisfy anyone you bring along, if not, leave them at home, it’s cool, no one likes a pain in the ass for a friend anyways.

The crust, it’s all about the crust – BEVO Bar and Pizzeria