Watching the leaves change color and trying to deny the fact that it will inevitably get colder, I’m trying to cling on any reminisce of summer I can and refute the idea of the imminent winter; kind of like when you start to get that little stuffy feeling in your nose, your throat gets a bit itchy, and then you try to convince everyone who’s dodging your cough like the plague, that’s you’re NOT sick. This explains my quest for barbeque in October that doesn’t require me to stand in the cold tending to a rack. I’ve been reading about this new smoke house making some noise in Little Burgundy called Le Boucan and I decided to check it out.

We looked over the menu and decided on our choices with some help from the waitress, which was kind of hard as everything seemed interesting, especially the “Boucan Nachos”. Normally the thought of nachos isn’t really synonymous with the idea of southern bbq.

I asked what the nachos were all about and was informed that it was topped with smoked chicken. I was skeptical… Pff, oh yeah, topping it with smoked chicken is going to justify nachos being on a smokehouse menu, kind of like the cocktail wieners in a Chinese buffet table; just because they’re sitting in a pool of soy sauce, does not rationalize them as being “Chinese”… I was wrong. 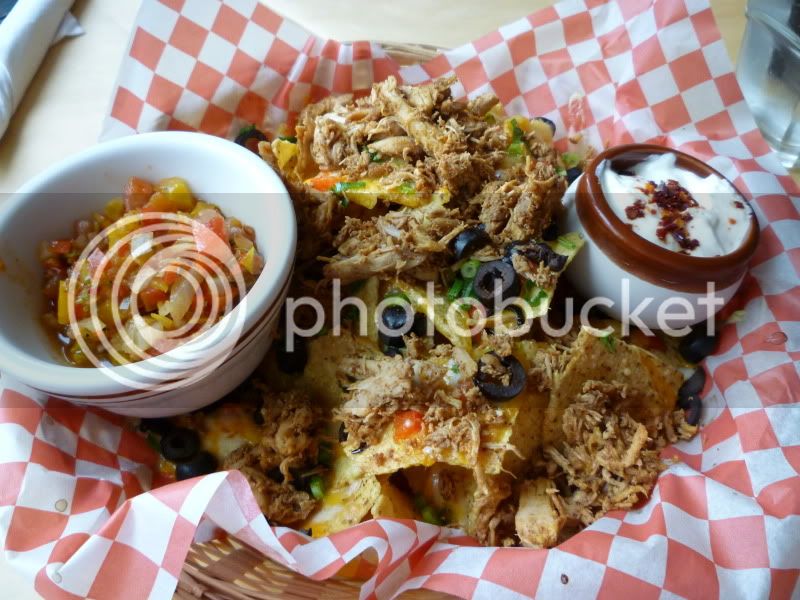 The chicken was complimented with a grilled tomato salsa; extremely sweet, the smoke really brought the natural sugars and caramelized the tfomatoes well. The chicken was sweet and savory as well, I can totally picture it as a kick-ass chicken salad sandwich.

I had the half rack of pork ribs. All mains come with two sides; I chose the fries and coleslaw from the list that included, potato salad, and a green salad. The ribs are smoked and then basted while finished off on the grill. The sauce is an apparent Kansas-tomato based sauce, sweet and deep in richness and flavor. This particular rack had a great bark, however, I found it to be a bit on the lean side.

The red cabbage slaw was a great compliment to the robust and thick flavor or the ribs and sauce. It had a nice tang from the vinegar that cut through everything and the crispness of the cabbage added nice texture to your bite.

My friend had the “5-napkin burger”, right when I read the name I knew it was going to be a big ‘ol sloppy burger that would need five napkins (duh) to cleanup the evidence of the innocent slaughter of a helpless burger. So to test their claim, I bugged my friend by lining up five napkins she was allowed to use.

A hearty beef patty topped with a slice of pork, the burger was drenched in a sweet and tangy Alabama based barbeque sauce. Real juicy and a nice size, the burger was definitely as messy as we anticipated. It should also be mentioned that the fries were called “Cajun fries”; dusted with salt, pepper and smoked cayenne pepper added a little zing to what normally would be regular fresh fried-fries.

Her side was the potato salad. The potatoes were firm and still had a bit to them, a nice change to mushy potato salads that usually find its way to my plate. The dressing was light and fragrant in dill, this tater salad was refreshing.

Coincidently, Le Boucan was on the Food Network’s new show “The Opener” featuring Chef David Adjey, their airing date is October 12 – according to the Food Network’s website. It’ll be interesting to see the behind-the-scene footage and the “making of” Le Boucan and the process they went through to open the place and to see if they’ve stuck to Chef Adjey’s advice.

Le Boucan is a great addition to the up and coming neighborhood, we all know when you’re shopping for antiques, one might get hit with a barbeque craving and Le Boucan is there to calm the storm. As they’ve only been open a few months, there are a few things I’m sure they are ironing out and really not worth mentioning here. So if you’re looking for a barbeque fix and there’s white stuff falling from the sky, follow the smoke trail here.

p.s. My friend faced the challenge and defied the name – she only used three of the five napkins while eating her burger… but to her discredit, she only finished half the burger… haha.

p.p.s Here’s the link to the recent Food Channel’s “The Opener” episode featuring Le Boucan. Search the video section for the episode.

I don’t often eat eggs, but when I do, they’re poached. – Allo Mon Coco

Food is really good, however the management of the restaurant is another thing…

Me and my boyfriend wanted to go have dinner there one night and so we dropped by and asked a table for 2. The owner/manager of the restaurant told us that all table were busy (which was true) and said no more. So, I insisted by asking him if we could just wait until a table gets free, but the guy told me that even if we would wait, he had already reserved all the tables for the night…
I was so mad that he didn’t manage to keep at least 2-3 tables free of reservation for customers that would drop in without any……..anyways.

That’s definitely not a cool thing to do. You would think a restaurant can be confident enough to not have to bank on reserving the entire dining room for the whole night for business…

Thanks for good info 🙂