What is your relationship with food like? Do you have a favorite meal that you go to when you’re feeling down? Is there a dish that evokes certain memories and emotions that you can envision yourself in particular place and time? As I’ve come to eat my way across Montreal, I’ve created associations with restaurants and dishes that will either bring back a flood of delicious memories, or the horror and fear of getting stuck in traffic after an unpleasant run-in with a bowl of ice cream and a bottle of diet coke.

Little did I know, I would forge a very special relationship with a restaurant before I even stepped foot in the place; it’s been going on for the last 2 years. Someone suggested to me, Hwang Kum, a Korean spot on Sherbrooke. I went twice to check it out, only to find the place closed both times and I took it as a sign and decided to shun it off my list forever; if I’m not meant to eat there, then I’ll stop trying. Then it happened… from the corner of my eye, like spotting accidental cleavage, I notice the “OUVERT” side of the sign was facing the window, I parked the car and IT.WAS.ON!

So this particular day, it was my mom and I for lunch. We looked over then menu and made the appropriate choices for this incredibly hot summer day.

No sooner did we order, we were presented with the banchan. As mentioned in my other posts on Korean restaurants, the small side dishes are to compliment your main dishes. This was the potatoes marinated in sweet soy sauce, and behind that was the cubed daikon kim chi. Paralleling ying versus yang, good versus evil, Christina Aguillera pre-divorce versus Christina Aguillera post-divorce, both dishes were dramatically different in taste but similar in texture.

Next to that was two dishes of peppery marinated bean sprouts and sweet mixed, sliced cucumbers. Again, the flavors and textures are complete opposite from each other. What normally happens with these side dishes is the people end up eating all of them as a pseudo-appetizer, rather than an accompaniment to their meal. You can, but why eat all the magic before your meal?

Hwang Kum is the first place I’ve been to leave the entire leave of Napa cabbage intact when serving their kimchi. So don’t be alarmed when the waiter places a pair of scissors on the table (it’s to cut up the kimchi). It’s quite sexy and elegant the way they serve this… I mean, as sexy and elegant as fermented cabbage in chili and fish sauce can get.

We started with the Haemul Pajeon – the seafood pancake. I’ll be the first to say that this version of the pancake is unlike no other I’ve had before. It was a lot more airy and less dense; the vegetable ingredients were shredded rather than lovelessly tossed into the batter. This is one of the FEW exceptions that I’ll eat cooked carrots… *shiver*.

Not to say that this version is better or worse than others, but it’s different and it’s a testament to the way the chefs were taught or even maybe the area in Korea they’re from. It’s served on a extremely hot cast-iron plate. If the sizzling didn’t give it away, make sure not to touch it like I did. I have this weird habit of touching things to see how hot they are. Yeah, so don’t do that, it sucked. 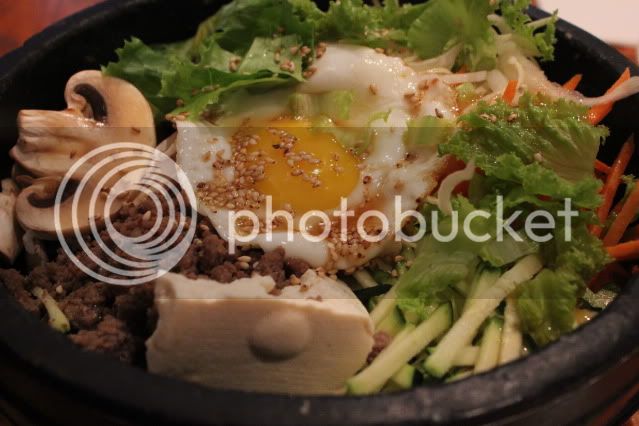 My mom ordered the Dol Sot Bi Bim Bap, which is essentially a rice with toppings served in a fiery hot stone bowl – yes, the bowl was friggin hot, trust me. Topped with sauteed beef, tofu, vegetables, pickled carrots and daikon and a fried egg. The way to eat it is, mixing everything together with the gochujang (sweet chili paste) BUT, not disturbing the rice that’s touching the inside of the bowl. The gloriousness of this dish is the burned and hard bits of rice stuck to the bowl that you scrape with your spoon into your bite as you’re eating.

I had this dish – bibim naengmyeon. A weather appropriate cold potato noodle dish, served with pickled daikon and cucumber and marinated raw fish slathered in gochujang. There’s a sweet and sour vinegarette dressing on the dish as well.

I swear by Korean cold noodles when the temperature rises over a pit-drenching 30 degrees not including humidity. When my style is crapped and am unable to ride with the windows down and the sunroof open, then it’s way too hot. Ask for the spicy mustard sauce; it’s a mix of dijon and vinegar that adds a completely different level of awesomeness to this cold noodle dish. That sauce is usually used for another cold soup noodle dish, but it works with this one as well.

If you noticed, Korean cuisine is all about textures in bite and complimenting and contrasting flavors. Some people might be apprehensive of such a party-pack of flavors, but you’ll just have to try. If you’re courageous, then take a dive off the deep end and challenge your comfort zone and try something new. You never know, you might like it… Unlike my nephew who only eats chicken nuggets, french fries and my mom’s egg fried rice.

Opened Wednesday to Sunday
12:00pm – 3:00pm
6:00pm – 9:00pm
You would think I’d take note of the opening hours after showing up twice and the place being closed, but I never thought of it; HEY, I write a food blog, I’m not a rocket-scientist.

A carnivore, a vegetarian, and a vegan walk into a restaurant… – Restaurant Arepera

Challenge accepted! All you can eat Korean BBQ...

I can’t tell you how many times I have eaten here: fresh fresh fresh and downright delicious are thoughts that come to mind with this resto. Where’s your ‘like’ button cause I want to press it….

Funny, I too have tried to go there a few times and failed, and eventually gave up on them. I’m pretty excited by the fact they have an actual clay stone bowl (and not a plastic bowl) for the Sol Dot Bi Bim Bap! I guess it’s going back on my restaurant list!

Hmmm that’s not too far from my place, I’ll have to go there sometime! Le Petit Tokebi, a bit further west on Sherbrooke, a block or 3 west of Cavendish, also has stone bowls.

all right, this looks fantastic, and I did *not* know that the banchan was intended for eating along with dinner (even though that’s kind of a “duh” obvious thing now that I think back to what little I know of Korean food). Checking this place out for sure! ^^

Hi Elizabeth! You learn something new every day! If you end up going, let me know!

Hwang Kum is great, isn’t it, thanks for the yummy reminders. And thanks for the fun blog, I just found you today, and will read more for sure! Wanted to suggest you try another tasty Korean in NDG – the Seoul BBQ on Cavendish, just down from Monkland, and across from the CLSC. The food is just as delicious, esp the seafood pancake…OMG. Negative is the location — a bit weird, and the dining room is big and sometimes a bit empty feeling. But if you’ve got more than 4 people, it’s hard to get a table at Hwang Kum, so Seoul is a better bet. (PS, you take great photos — what kind of camera you’re using?)

Hi Catrina, Yes, I’ve been there numerous times but never got around to writing about it. It is definitely an odd place, but I like the fact that most of the tables are burned from the BBQs! I use Lumix compact and a Canon DSLR. Thanks for commenting! How did you discover my site?

Oh hello order the galbi and ask for a side of lettuce. So yummy! Comes with fermented bean curd as sauce as well… (foo yu) not sure if everyone will like it tho lol