You’d think that after my big quest to find Montreal’s best Pho, I’d be sick of noodles by now; no, my insatiable thirst for noodles has no bounds. Like girls have a secret stomach for popcorn, chocolate and gossip, I have a secondary backup stomach for noodles, pizza, sushi and fried stuff with cheese. So on a cold winter night (yes, we’re still in November, but the shit is cold enough at night that I’m calling it winter, deal with it), a bunch of friends and I hit up Nudo noodle house, a spot in Chinatown who’s pulling noodles and slinging grub.

Th menu is pretty straight forward, soup noodles, or dry with soup on the side, appetizers and add-ons to your bowl. The side dish list has some really awesome choices that I’m a big fan of that I couldn’t pass up ordering – and for an average of two bucks a pop, I couldn’t not.

Beef tripe in spicy sauce. The tripe was cooked down enough that minimal effort was needed to chew through them, but still yielding a nice crunch in each bite. The spicy sauce was just a tingle and was fragrant in sesame oil.

I also ordered the pork ear in the same spicy sauce as the tripe. Thinly sliced, the pork ear is completely a textural affair. If you like to eat cartilage (I mean who doesn’t?!) this dish is where it’s at. The cooked oil that coats this dish adds a unmistakable smokey tinge to the dish. 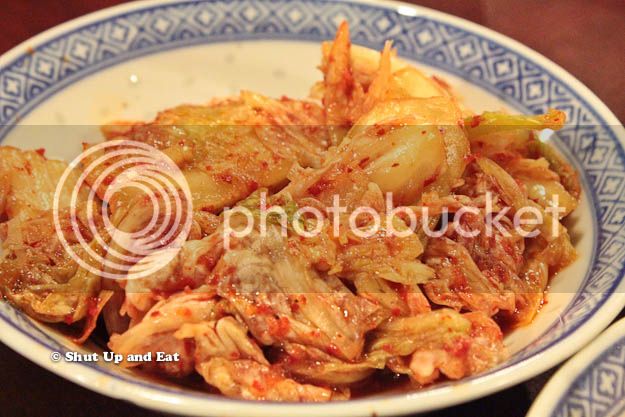 Kimchi – Yes, kimchi is traditionally a Korean thing, so why is it served in a Chinese restaurant? Probably for the exact same reason Le Fameux Smoked Meat serves “riz frit a la Chinois”. No, this is Chinese “kimchi”, and what makes this kimchi Chinese, you ask? Probably, the last name of the person making it. In reality, szechuan cuisine has a kimchi of sorts of there own… Chinese kimchi… “Chichi.” 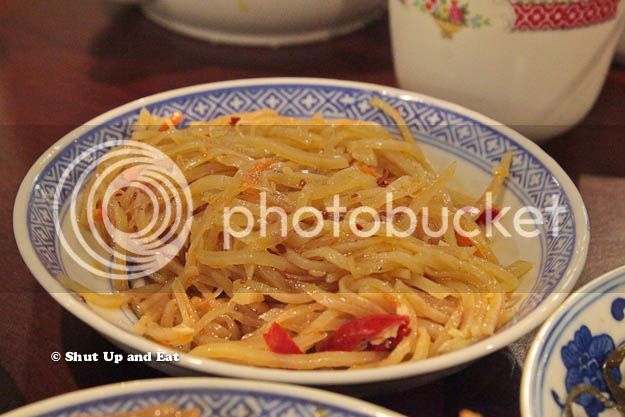 Shredded potato salad with spicy sauce. Raw potato strips bled of the starch and mixed with the ubiquitous spicy sauce; it was a bit spicier than the other side dishes with the same dressing – the porous absorption of the potato has something to do with that, especially sitting in a big tub stewing in its own liquids… like a bath. 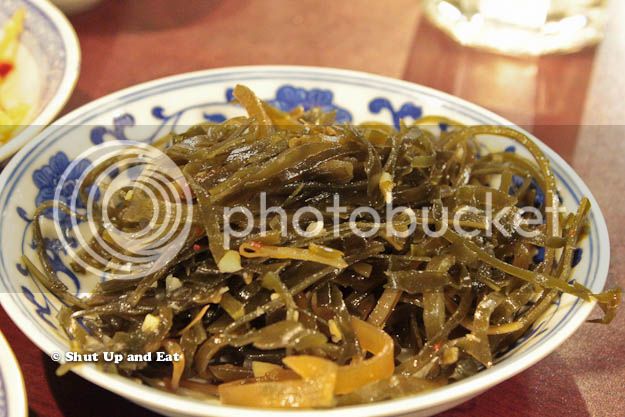 We were also given a complimentary side dish that comes with our meals which was the seaweed salad. Probably a bit different than the one that you’re normally used to, this was straight up kelp. Keeping with the same crunchy family of side dishes and stemming from the same mooky monotonous colour pallet, the flavour itself was salty and briny, uneventful.

We also split and order of the pan-friend chicken dumplings. The filling is not too filling, and as tasty as it was, a bit stingy with the macerated chicken filling. However, the skin was nice and chewy with the right amount of griddle burn. They bring you the entire bottle of Chinkiang vinegar so you can drown your dumpling and its disappointing filling until your heart’s desire, which is a big plus.

My friend had the barbecue pork noodle with the addition of a Chinese “tea egg”; served with blanched “Yau Choy” – rapeseed leaves and topped with pickled cabbage. The pork was sliced thick and substantial. The piece I had, I found a tad on the fatty side, but tender and flavourful. The “tea egg” – boiled in a mix of soy sauce, five spice, cinnamon, clove, anise is usually eaten as a snack but very commonly added to dishes and noodles as an accoutrement. The addition of the egg was merely to appease my friend’s palate and emotional attachment to it. However a nice earthy bite as a cleanse, I can imagine to be appreciated between the unctuousness of the pork and sweetness of the noodles.

Another order the preserved radish and pork noodle, blanched Shanghai bak choy and again, with an egg. One of the most traditional of ways to have hand-pulled Chinese noodles. Sautéed salty sliced bits of pork top this bowl that mix well with the intensely sour bits of pickled radishes. The clarity of the soup balanced everything completely. The soup was tame and did not fight the pronounced flavours of the toppings, instead, helped dilute the brackish picking liquid of the radish, giving the soup an entirely different spectrum of flavour. 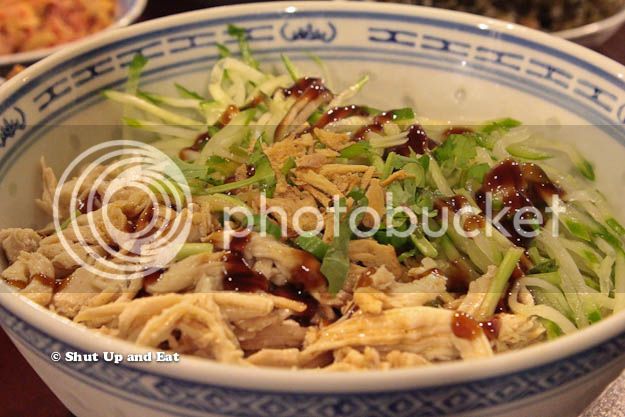 My lady had the pulled chicken noodle. Served with a julienned cucumbers, scallions and cilantro, fried shallots and a drizzle of sweet oyster sauce, the bowl was fresh and plentiful. This dish comes with a small bowl of soup on the side, and it’s sole purpose… noodle lube. Since the noodles are freshly made and boiled within seconds, the noodles will stick to each other rendering them a gigantic lump of swirly pasta that looks like your sixth grade Halloween haunted house rendition of a brain. Gently ladling in soup one spoon at a time, helped loosen up the noodles making the entire bowl a bit more manageable in terms of tossing the toppings together and creating a dressing with the oyster sauce. The chicken was tender and moist – KEY, tossed with the cucumbers and dressing, this bowl was partial to a pasta salad.

I had the braised beef shank… no egg. The thick cut slices of tendonous beef shank, was tender and piling out of the bowl. Topped with the same garnish of pickles vegetables, the soup teased with the braising liquid that shared a ladle with the beef. The sharp salty crunches of the pickled vegetables really cut through the robust beef that had hints of anise, five-spice and other earthy aromas.

The money shot – the noodles themselves. Toothsome and hearty, the noodles went on forever; they were also awesomely chewy with the right amount of bounce. The sex encompassed in these magical strands of hand pulled flour noodle is completely of the charts and is encroaching on the Bradley Cooper scale. As a straight male… these noodles almost got me pregnant… or vice versa. Yo, you can’t fight it, you just have to go with it. I have to mention how extremely generous Nudo is with their noodles – simple, because they make it right there on the spot. This probably explains the fact that it averages out to $7.50 a bowl that will be tough to finish, unless you’re down with food-coma.

When you walk in the door, more chances than none you’ll be encountering this. Like walking in on a back-alley beat down, the sight will leave you either speechless or excited while you witness the bad-assery going down. Unlike the other place in chinatown that USED to pull them own noodles, at one point of the evening, they had three guys making noodles at the same time to show that they are legit.

I’ll be the first to admit, whether or not the name of the place is a clever play on words (Nudo – Noodle) or an innocent choice of name, the Engrish in itself is as delicious as the noodles coming out of the place.

Being the newest of their three locations, Nudo noodle house is by the same guy who started Yuki Ramen in the Faubourg. Training his noodle-men, the original owner has pulled his way across the city with their third location nestled in Montreal’s Chinatown. Once dominated by Cantonese restaurants, Nudo finds space in our quaint quartier to represent the noodle loving nation.

There’s a second one in the Eaton Centre and they are the same owners (and recipe) as Yuki Ramen in the Faubourg.

Yes, as stated in the last paragraph. Three locations to facilitate the noodle eating! Thanks!

Mmmm do the noodles come separate from the soups or is there a special soup for the noodles? got to go here this weekend

The noodle with soup on the side was in the “Noodle without soup” list.

Hi! Just to say that “Chinese kimchi” is actually a way of making kimchi that the Chinese inherited from the Korean ethnicity group in China. It is quite similar to North Korean kimchi, which mainly differ from the southern variation by the absence of scallions, chive, shrimp paste, etc.

Hi Amy. That’s what I meant when I said “szechuan cuisine” has a variation of Kimchi. I guess I wasn’t clear enough when I assumed szechuan cuisine is synonymous with northern China – where the Korean boarder is. Thanks for commenting!