There are a few famous Montreal icons that are synonymous with our great city. For example; smoked meat sandwiches, Caleche rides in Old Montreal, the Spoon Man in front of Olgilvy’s, our vibrant night and cultural scene, summer festivals, eclectic neighborhoods, and full contact titty bars. Then there are the not so glamorous things that lend themselves to Montreal’s notoriety but we take credit for and are just as proud of; the deteriorating eyesore of an Olympic stadium, corruption, collusion and the revolving door at city hall (Toronto has nothing on us, in the time their mayoral drug tape tried to surface, the GMA has gone through three mayors and a city bankruptcy; T dot, step your game up), failing infrastructure, and when Celine Dion curls her lips and pounds her chest in a dramatic and cheesy gesture during a crescendo of an adult contemporary pop ballad.

Joking aside (I mean, let’s face it, we can go on forever), the good outweighs the bad and Beauty’s Luncheonette is what’s all good about Montreal. For as long as I can remember, this spot has always seen a lineup out the door and around the corner that would rival the one seen at Schwartz’s on the weekend.

I hit up this spot that that has been serving breakfast for over 70 years. With solid breakfast dishes with a touch of Montreal Jewish deli and nostalgia, the menu is concise and offers up everything you’d need to start your day.

My girl ordered the “Mish-Mash” omelette – hot-dog, salami, green pepper and fried onions served with potatoes. With fried hot dogs AND fried salami, this omelette really is everything you want it to be. The eggs were fluffy and the meaty goodness topped off what is already a pretty tasty made omelette. The potatoes were encrusted with delicious griddle crust, crunchy, burt and nice. 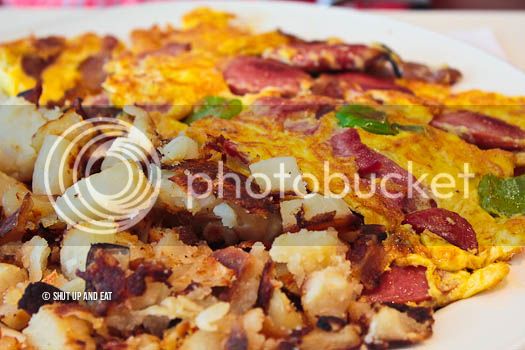 There really isn’t anything more perfect that tubed meat fried up on a flat top then wrapped in egg. Served with a choice of white… Actually no, you have no choice but to take this dish with a bagel; and to be quite frank, to have this with anything but a bagel would be wrong and would just be a slap in the face to this timeless institution. You’re going to have it with a bagel because they say you’re going to have it with a bagel, that’s it, that’s all.

I had the Superbeauty’s 2 – Two eggs, pancakes, bacon & sausages, home fries and bagel – a classic fully loaded, hangover buster breakfast plate. Perfection. The sausages were sausages and the bacon was bacon, but let’s take a minute to talk about the pancakes. I’ve been known to do very despicable things for good pancakes; things that my parents have warned me that would result in emancipation and being disowned. The pancakes were not overly sweet and even had a slight tinge of savouriness to them. I would attribute this to being cooked on a very well seasoned griddle that has seen the backside of eggs and bacon for decades. Like Chinese restaurants have the “wok hei” – the “breath of the wok” that constitutes the umami of a dish; in this context, I would call this Beauty’s Jewish “Oymami”.

If this is wrong, then I don’t ever want to be right… I ordered a side of pancakes for my breakfast plate. Hate me. I don’t care, you’ll understand when you get there and try them for yourself. Upon seeing the name on the menu, my first initial instinct was to look to see what comprised of the “Superbeauty’s 1″ (which is nowhere to be found.) If this breakfast plate is already everything you could possibly imagine a proper hearty breakfast to be, how do you improve on perfection to warrant a 2.0 version?

Beauty’s breakfast isn’t anything fancy; they aren’t reinventing the wheel. Actually, having serving breakfast for the past 70 years and claiming they were the first ones to serve breakfast in Montreal, it’s safe to say that they pretty much invented this breakfast wheel. It’s the charm and romanticness of the restaurant that has the most appeal – it looks like it hasn’t changed in decades – a classic diner that’s stuck in time, with contemporary prices.

Cronut in Montreal – The Cronetto

What is monosodium glutamate – M.S.G. ?