This place isn’t one of those nondescript type places nestled away in a back alley in Chinatown that’s only accessible through a curtain down the hall from a mahjong parlor. But it’s the type of place that strengthens its street visibility with neon, either too late or too early festive Christmas lighting and perma-plaqued newspaper articles and reviews, quintessential signs that you’re about to eat at a Chinese restaurant.

So Mongolian Hot Pot made its appearance in Montreal a few years ago and has been simmering ever since. So why is a sheep representative of “Mongolian” hot pot, as opposed to the various other visuals of livestock you’d want to be picturing as you’re eating? Because sheep is to Mongolia as Lady Gaga is to tampon string flashing crotch shots. I’m sorry to have said that, but I’m not sorry for implanting that image in your head… haha.

So this is what happens, you order the type of soup you want, either a spicy, traditional herbal or non “hot air” (this concept covered here) inducing soup base and it’s set to simmer on top of this thing (induction burner) that looks more at home on the deck of the Starship Enterprise than it does in a Chinese joint. This is the Dr. Xavier eara Enterprise I’m talking about rather than the Studio 54 Enterprise where they were steering the ship with old fire alarm levers and Staples “easy” buttons.

I opted for the “Refreshing soup” base. I should also mention that all soup bases are based on Chinese medicinal herbs (which include dried Longans – dragon eyes, dried dates, mushrooms, ginger, whole garlic cloves, szechuan peppercorns, scallions, to name a few), as well as other various fungi and tree bark that are unpronounceable due to the fact that in their names, the consonants out number the vowels that defy the U after Q rule, require hyphenation, and basically make you sound like you’re sucking the tip of a 9 volt battery.

So once you order your soup, almost instantly, a plate of the restaurant’s namesake is placed on the table. Freshly sliced lamb and beef. 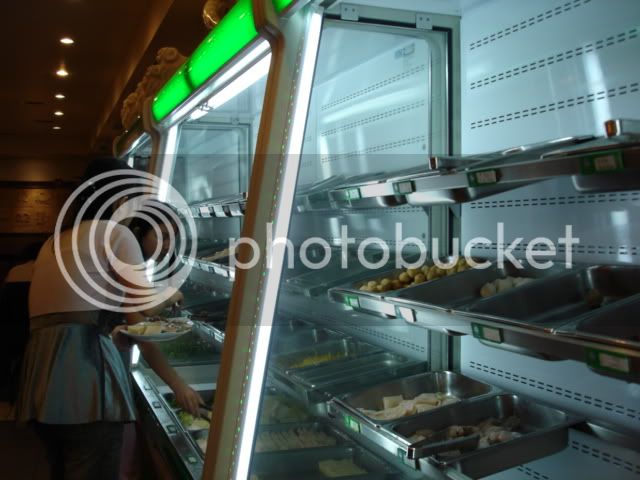 Purely coincidental, but this place is all you can eat as well. I know I know, it seems like a running theme, but can you really blame me for pointing you in the direction of endless plates and bowls of gluttony? They boast a hot pot selection of over 70 items. A myriad of vegetables, seafood items which include various fish and shellfish cakes, tofus, at least 5 different kinds of noodles, as well as other unique hot pot accouterments you must try.

Do yourself a favor and try that vegetable. The phonetic translation is “Tong Ho” and I don’t remember, but I think it’s listed as that on the name plaque in the fridge. It’s “Chrysanthemum Greens”. It has a unique peppery and spicy flavor. Also pictures of the various “balls” – both beef and seafood… Yeah yeah, save the jokes, it’s sad enough to picture fishies swimming around without balls.

As with being “all you can eat”, Mongolian Hot Pot is also “all you can drink”, which includes a few Chinese juice options as well as your standard soda fountain. Let’s be honest, if you’re not already jaded by working in the restaurant service industry, wasn’t it one of your childhood dreams to work one of these machines? …Maybe it’s just me, but I can never get enough experimenting with glass to trigger angles to fully maximize the soda to foam quotient to optimize a full glass potential. Pulling your own beverages is a science kids, do it right or go home.

Head over to the sauce station and fix you up a sauce. My favorite is hoisin, soy suace, “BBQ” sauce, sesame oil with some scallions and coriander.

Be warned, this concept of “all you can eat” at Mongolian Hot Pot is all encompassing. From the spring roll appetizers, to desserts. They offer your standard no-love buffet pastries and cakes. But what is unique to this place is their fried Chinese buns and sesame balls. The fried buns are what’s best and is what people stand by the plate with tongs ready for their arrival. Crispy on the outside and chewy on the inside, you drizzle condensed milk over the top… but you might find a liking to it and choose drowning the bun like some people and serve yourself up a bowl of condensed milk with a bun floating around somewhere. Kind of gross, but people do it.

The aftermath. Be careful of how much you take, because there is a fee and charge for uneaten food of more than 200g. You can visit the fridges as many times as you want, so waste not what you put on your plate.

The overall experience is great. The service is par, you can’t really expect much when it’s practically self-service, but they do watch over your table pretty well and fill your pot up with soup when it’s running low. I should also mention that the medicinal herbs used in the soups will tackle your senses. It’s kind of like when you’re in a room and someone has really foul, sour smelling body odor, and you’re not sure if it really is B.O. but something tells you it is. Its objective isn’t to slap you in the face but it’s to stick around for the long run and remind you all of its presence – like these herbs. Not to say that they smell like a truck driver who has no air conditioning driving through Arizona, but the smell is very pungent and will stick to you like a fly in molasses. You will come out of there smelling like what you just ate… but it’s so worth it, it’s like smelling a band-aid… it’s gross but you know you do it anyways.