Labour day… what does it really mean? People have the day off, procrastinate on the chores they’ve been putting off for the “next long weekend” since Canada day and reschedule for Thanksgiving, catch up on sleep and if you happen to live in Canada, you spell it with a “U”. It always signified the start of school for me, and the depressing ultra sunny JC Penny commercials with kids in new school clothes and crisp backpacks jumping in the air looking way too happy to going back to school.

I headed to Parthenon, a local mom and pop Greek joint in Cote Des Neiges this afternoon in search of the perfect Sunday lunch. When you know you’re going to be lounging around the house watching old episodes of whatever is showing on tv and consolidate past emails, there’s nothing better than to stank up your breath hardcore with some kick ass, garlic potent tzatziki on a sunny afternoon.

We started with the calamari. We were on a mission for calamari. Many a times I’ve been standing at their counter waiting for my take out and watched them dredge their fresh calamari before frying them up. So being lightly floured leaves it extra crunchy and does not leave them onion ring like. There’s nothing worse than biting into fried calamari and having it separate, leaving the squid in your mouth and batter on your lap.

I loves me some Greek salad. You have to be courageous to attempt a full platter Greek salad. I for one, am able to eat an onion whole and there’s nothing I love more than raw onions on everything. Also, Parthenon is not shy with the feta, so if you like cheese, you’ll score with their salad.

My friend’s chicken souvlaki in a pita ordered without tomatoes. That was due to preference, but I strongly believe in tomatoes in my souvlaki pita, otherwise it isn’t souvlaki. It’s like fries without ketchup, or ice cream without Bailey’s, one is synonymous with each other, like you’d never see Bert without Ernie or Kanye without Amber.

I had the one stick chicken souvlaki plate. Let’s get serious for a second. Have you ever seen that show on The Food Network, “In Search for Perfection”? If Heston Blumenthal was ever looking for the perfect Chicken Souvlaki Plate, he would find himself on the corner of Cote des Neiges and Van Horn in Montreal.

The chicken was perfectly grilled and remained juicy with the right amount of char on the outside. The rice was fragrant and fluffy, just the way I like it. 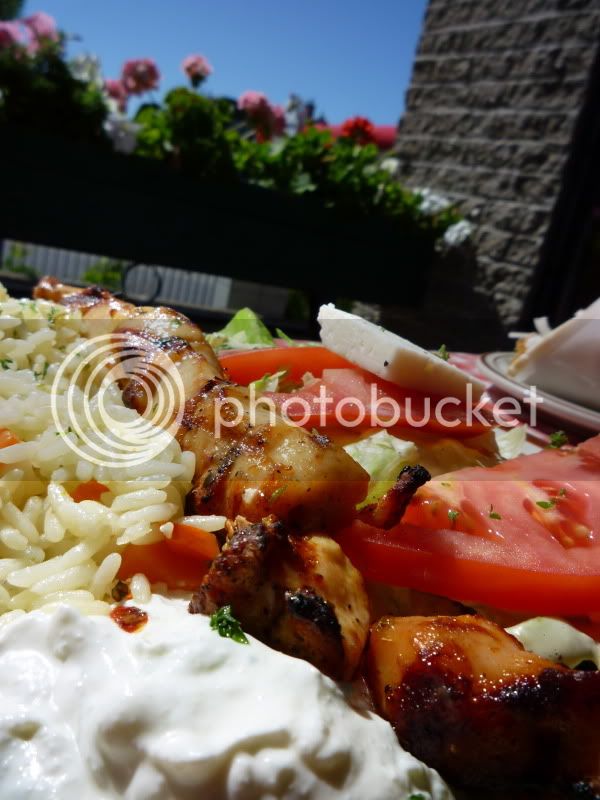 The dressing on the green salad that came on my plate was a mix of a vinegarette and Big Mac sauce. GOOD. Needless to say, the lethal combination of the onion explosion from the Greek salad and spicy garlicy tzatziki, it was a stipulation that I was going to spend the rest of the afternoon alone and very far away from people.

Parthenon’s dining room features an “indoor terasse” covered in vines and faux grapes and walls of murals of ancient Greek architecture, deities, and monuments. It’s a great place for an intimate table for two or a rowdy table for 10, but please, no breaking plates! This place has been around for a while and the fact that it’s family run, makes the food taste extra good. Parthenon is simple and honest, run by great people, the ultimate doctrine of delicious food!

Can’t put down at Depanneur Le Pick Up

I agree with that friend. TEAM NO TOMATOE!

That’s too bad, you don’t know what you’re missing!

i am very happy you like our food .
i am the owner from PARTHENON and hope to see you soon.
thanks

Thanks for leaving a message, I’m there more often than you know!