Their tasy noodle makes up for the lack of vowels in their name – Restaurant Phnom-Penh.

Days are getting shorter, weather is getting colder, and what says yule tide cheer better than garland and holly?… NOODLE SOUP. That’s right my friends, hot steamy bowls of noodle soup that will warm your hearts, fill your stomachs, and stank up your clothes for the rest of the day. Straying form the conventional “Pho” (which will be discussed in an upcoming entry) I hit up a local Cambodian restaurant for some Phnom-Penh noodle soup.

We went to Restaurant Phnom-Penh. A small local joint on the corner of Cote-des-Neiges and Jean-Talon. I’ve driven past this place many a times, but never had the opportunity to venture inside until today. Located next to a row of auto garages and in front of a major concrete median divided boulevard, I didn’t think this place would yield the kind of noodle I was looking for on this cold day, I was wrong.

We got inside and it was exactly what I wanted it to be. It’s the type of place that does not mess around, nothing fancy, you’re there to eat, pay and leave. This no-frills attitude is reflected in their menu as it only consisted of two appetizers and a handful of dishes, highlighting mainly their namesake, the Phnom-Penh noodle.

We started with the imperial roll. I never seem to learn, but every time I’m faced with something that’s deep-fried and still covered in scorching hot oil, I feel the need to shove it in my mouth as fast as possible. Word to the wise, if you want to taste your food and not feel like you’re chewing on a tube of Novocain having singed off your taste-buds, let it cool down first. 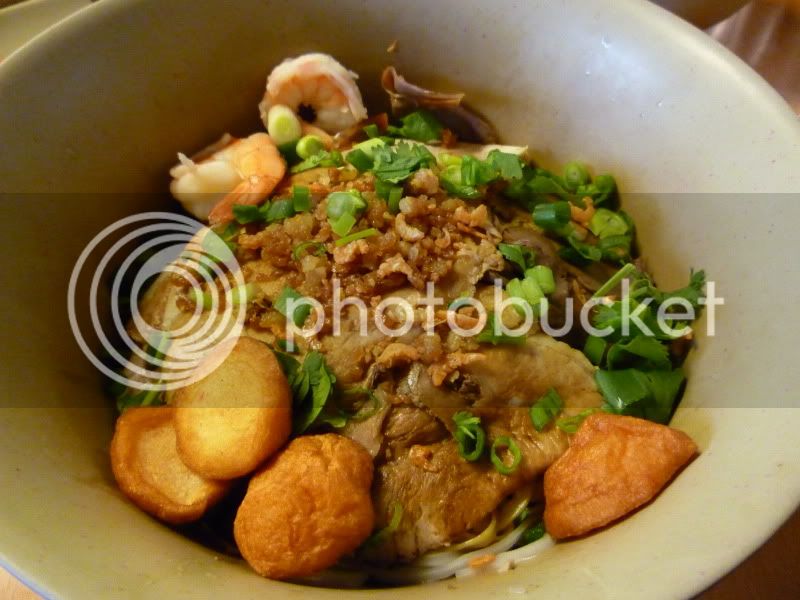 Next up was my noodle. My sweet delicious perfect noodle. When ordering I had the option of what kind of noodles I wanted in this Phnom-Penh dish. Rice vermicelli or egg noodle; I asked for both. Topped with pork and thinly sliced pork offal, fish balls, fried garlic and shallots, I looked at it perplexed and didn’t know how to go about it, apprehensive of disturbing its perfection.

I didn’t think a bowl of noodles could look this pristine, and that on some sort of level, it would be wrong to eat it. Side-note: I was told that the traditional way or preferred way when eating this dish dry is by topping it and pouring white sugar all over it. It was the first I heard of this technique, and tried it half way through. As contrasting flavors, it only make my noodles taste more salty with a sweet after taste. Interesting, but I felt that it didn’t add anything to the dish, it was like asking a girl in a bikini to put on a hat.

As mentioned in an earlier post, the Phnom-Penh noodle is aptly named after the city. This Chinese-Cambodian concoction is lighter than its earthy and meaty cousin the Pho, and more fragrant. My friend had the version with the soup in with the noodles, as opposed to my soup on the side.

It’s a big testament to your noodle soup when you go ahead and actually print it as your claim to fame on your business card. Their confidence behind the quality and taste of the Phnom-Penh noodle is justified.

So if you’re feeling adventurous and want to take a trip to a little piece of Cambodia on the 165, head over to Restaurant Phnom-Penh. Also if you’ve missed the latest episode of any sort of Vietnamese or Cambodian variety show, chances are they have it on rotation on the bunny-eared television sitting on the counter.

As good as your Nonna’s – Pasta Casareccia

I used to love that place as a kid! I haven’t been in yeeeaaars. My parents would order fried bread stick, iced milk coffee for my dad, I always went (still do) for dry noodles with soup on the side and dunk the fried bread in the soup… With the mix of Vietnamese and Khmer music in the background. Good times!

I know this place has been around forever but have never went inside. YES! Fried bread is ALWAYS good, in Chinatown, you can dip it in soy milk, weird I know, but delicious!

i want to hear from you Jason about Pnom-Penh VS Phuc Ki on this noodle soup.
Believe, i’ve been living in this hood for almost 2 years, never made my way there yet…
You the pro, you ordered this dish with the soup aside…a connoisseur…did they recommend you that?
my friend said this soup is easy to make…

Ohh, that would be stirring a big pot of trouble. I like them both equally and they each respectively have great strong points, because although they are technically the same noodle, they’re different. Which haven’t you been to?

No, I’ve always liked this noodle with the soup separate.

i had this soup at Phuoc Ky last night, and honestly, i wasn’t impressed at all, so PnomPenh gonna be on my to-do list in 2010 ;)…
Making this soup is way easier than making Pho, i’ll soon give it a try. Trust me, the Phuoc Ky’s version is not an authentic one, not at all :(.