When I’m not bitching about the concept of “brunch”, I’m having Dim Sum. Arguably the best way to spend your weekend mornings – in a crowded Chinese restaurant with old ladies yapping across two tables, steaming rungs of hot curious little bundles of various meats and vegetables wrapped in the pain of arthritic fingers that have seen at least half a pack of cigarettes before second hour of the Today Show… Not to mention the random tourist exercising the few random French words they picked up in their guide books thinking the best place to practice is in a Chinese restaurant saying “bonjour” and “si voo play” to the aunties pushing carts. AHHHH, Sunday! I have my go-to place for dim sum, and it’s hard to stray when you know a restaurant’s dim sum game is strong, however, recently there’s a new player in the Dim sum game and I went to check it out.

Located at the top (6th) floor of the “new” and relatively empty and desolate and sometimes mistaken for an old school Batman stinger TV graphic, Swatow building in Chinatown, I hit up Le Cristal for my Dim Sum fix. Opposed to what you may be used to from other dim summaries, you order a la carte – checking off items on an ordering card. The first thing I noticed were the unique items that I haven’t seen at other restaurants before and this piqued my interest.

Before the more interesting dishes arrived, I had to order some of my dim sum staples. The “Ha Gow” – shrimp dumplings. Shrimp paste, mashed together with whole shrimp with strips of bamboo shoots, enveloped in a rice and tapioca flour wrapper. For those who have had these little pockets of awesome before, you’ll know that once you let them sit for too long, picking them up with chopsticks become nearly impossible without either picking up its neighbour that stuck to it, or ripping the skin leaving you fingering half of the shrimp on your chopsticks and leaving a mess of dumpling carnage behind. PROBLEM SOLVED – Le Cristal wraps their ha gows in extra thick skins, let them cool, stack them on top of one another, doesn’t matter; because when you pick one up, it’ll remain intact. 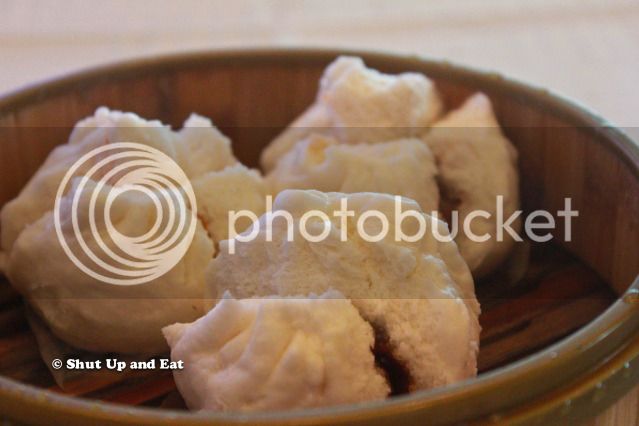 Steamed barbecue pork buns. This yeast and baking powder dough yields a thick and dense, pillowy bun; with a mix of chopped up Chinese roasted barbecue roasted pork. The blooming bun vents out all the steam and also acts as a natural splitting line for you to further cool your buns down. The buns are steamed on a small piece of parchment and contrary to popular belief and as much as people try to convince you otherwise, that paper is indeed edible… 😉

One of my absolute favourites, black pepper steamed short ribs. The short ribs are steamed in a gravy of the run off of the marinade thickened with corn starch. The beef has a little bounce in its bite but its tenderized accordingly. Best part of this dish is the chewy bits of tendon around the bone – speaking of which, be mindful as some of the pieces may have smaller bits of bone still stuck to the meat.

Next was the “steamed Kobe beef” rice roll. Fist, it probably goes without saying that they probably don’t use actual Wagyu beef in this dish. Whether it be something lost in translation or they consciously omitted the “style” part of the name, I wouldn’t take the name too seriously, just like how the Vancouver Canucks call themselves the President’s trophy “winners”. The beef was extremely tender and moist, I attribute that to the marinade of soy and baking soda. Mixed with water chestnuts and green onions, the steamed ice rolls had nice crunchy bits to it and was complimented with the homemade sweet soy sauce.

Here is where lunch got a bit weird. The beef cube with soy paper wrap. Our Filipino waitress set this down in front of me and I wasn’t sure if I wanted to eat it or poke it with a chopstick and watch it jiggle. Like the previous dish, the beef was mixed with bits of water chestnut, green onions and bamboo shoots, mixed with soy bean sheets and steamed in a tray and cut into cubes. The taste itself wasn’t mind blasting more than the texture of it was a complete mind-f*ck. A distinctive ‘bounce’ to the bite I couldn’t get over the roughness and scratchiness of the soy paper incorporated into the beef that definitely gave this dish volume.

We then got the spring roll wrapped in steamed rice flour roll wrapped in roll wrap wrap roll roll wrap roll. At this point I was convinced that this menu was created just to mess with me. How do you put something that’s crispy and fried into something that’s warm, soft and steamed?! I ordered this purely based on the novelty of the dish, thinking to myself that this isn’t going to work… It was placed in front of me, joking around with my lunch date, I nonchalantly picked up a piece and put in it my mouth. As I chewed, the crunch of the spring roll intertwined itself with the warm and soft rice flour wrap. 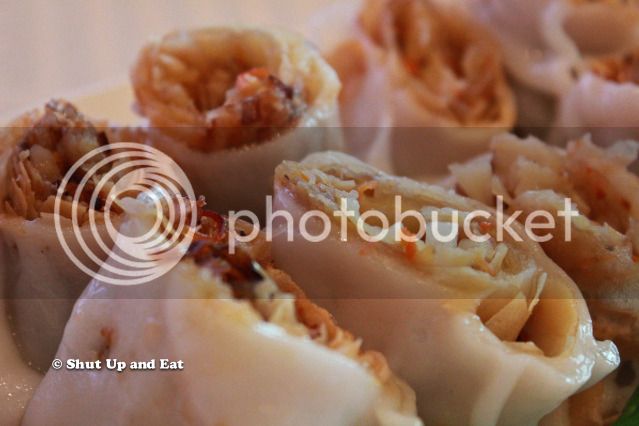 I put my chopsticks down and slowly looked at my friend and said… “Oh… my… God… It works.” She, of course had no idea what I was talking about because the monologue of questioning the wackiness of the dish took place in my head, as she asked what it was that “works.” The only way this dish would work is if the spring rolls are freshly fried as well as the rice flour wraps seconds from the steamer, married together and on your table within minutes. Served with the same homemade sweet soy sauce, this dish is definitely something you’re not going to find in your favourite dim sum joint.

Normally you would be able to get a sneak peak of what the ladies are pushing in their carts when they abandon their Franglais explanation and just show you what’s in the steamers. Le Cristal remedied their a la carte ordering system by providing you with a photo album of all the dishes that they offer… like those bars in Thailand where you can pick out your date for the night… I mean drink of choice. Price wise, Le Cristal is a bit more expensive, but not enough to notice when you’re in the company of fellow dim summers and dumpling aficionados. Give it a shot, it’s solid. I plan on going back to explore the rest of the menu.

I dare you to order the pizza with pineapple, I DARE YOU – Pizzeria Napoletana

Hack your fish – Brit and Chips

Heard so much about this place and so glad to see something finally different in the Dim Sum scene in Montreal!!! Can’t wait to go try it! thanks for the as always awesome review Jason!

come on, i was expecting more than this from you jason.

le cristal is already a shitty place to have dim sum according to many cantoneses if not all. at least try dim sum in other north american cities, like SF, NYC. even those are far far far worse than the real deal in hong kong or southern china. but as for montreal, le cristal has not even reached the city’s average, let’s just say Kam Fung is at the moment.

The cantonese people I know who’ve been didn’t have a problem with it at all. What makes it shitty? Luckily I like to find out for myself before listening to hearsay. Le Cristal’s approach to dim sum is completely different than everyone else’s. It’s ok to try something new, worst thing that can happen is that you might like it.

Yay…thanks for checking this place out. I go with a group of friends about once a week to the Ruby Rouge. We saw they were open but had not decided whether or not to venture in. We will go and definatly try that spring roll.
Thanks!

I go to Dim Sum at twice a month usually. Sometimes four times. I had planned going here – we had gone up to see what it looked like after Dim Sum across the street. Some guys told us how great it was. Then you wrote about it so off we went.

We tried the Beef with bean curd paper that you found weird. Loved it! Was probably my favorite thing.

We had a dessert that was called Kiwi seed dessert. A cool sweet liquid with black seeds. Very nice.

We were divided when it came to the squid tentacles… my husband loved them as they were batter free and tasty. I usually love them but found them tough and too cold.

Steamed rice roll is a basic standard that we always get plain for our youngest. It was fine. No chinese brocolli on the side like you got though.

The Kobe beef steamed rice roll was small, and no brocolli and really nothing special.

The spring roll stuffed rice roll which we had to try after you wrote about it had a mixed reception. My husband loved it. I think I was expecting a really hot crunchy spring roll after what you wrote. It wasn’t hot or really crunchy… and I didn’t find it that tasty either.

We tried the papaya cream dessert. This was definately underbaked. The filling was tasty but the dough was so underdone and greasy it was unpleasant.

The egg tarts were not half as good as most Dim Sum places. They tasted like margarine.

We ordered 16 unique items for 4 people – usually 12 is plenty. We had definately eaten less than usual. And they charged us a dollar per person for the tea.

I liked that there were different items available on the menu. But aside from the beef and beancurd paper cube, the cha chu bao and the kiwi seed desert nothing was really exceptional.

To be honest I prefer to go to Dim Sum twice a month rather than just once. So we won’t be going back.

I forgot to mention… the service was exceptional and the bathrooms were the nicest I have seen ever for a chinese restaurant – nicer than almost any bathrooms anywhere.

I think toilet cleanliness – especially in a Chinese restaurant trumps most anything else… even in life.